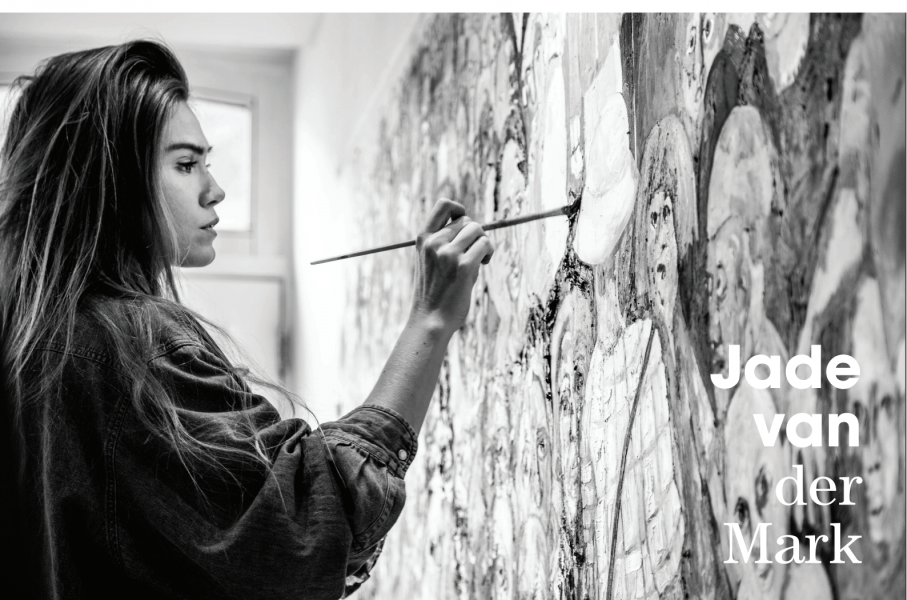 Working in a quiet and peaceful environment, the only sound you can hear in her London studio is a song by Philip Glass. The melodies intertwine themselves with the strong smells of oil paint. Most of the time, Jade Van der Mark works in a dressing gown and fluffy pink socks, keeping warm with a cup of coffee or green tea. She is surrounded by her large paintings of group portraits – canvases that are three or four meters long.

“I usually keep the area in which I work to myself, as it gives me the feeling of being safe so that I can express myself in the sincerest way. I am often reluctant to let other people into what I see as a very personal place, even my mother needs to be quite persuasive in order to be let in! In my studio, time seems to stand still.”

Jade likes to work on the ground floor of her studio as she can hear people passing in the street. The windows are tinted, so she can’t actually see anyone. She lets go of any prejudices and conjures up images in her head of who the people are and what they might be thinking. Before starting anything, Jade has a quite specific routine. She gets up, gets ready and heads over to the local coffee shop. As she spends the rest of the day alone in her studio, this morning ritual enables her to socialize before heading back to her bubble of classical music and paintings.

“I believe our world is a work of art and that creative souls can be born. We have so many beautiful things around us but sometimes we forget this when distracted by the stress of daily life.”

Growing up in Bergen, North Netherlands – well known for its expressionism – she always felt a connection with art and was encouraged to paint, draw and go to the theatre. From a very young age, Jade was surrounded by local artists who helped develop her very own creativity. She always knew that she wanted to become an artist, Jade declares, “I just started doing it. Believing in life you have to do what you feel, and take risks no matter what the consequences are.” Her early works were based on the countryside and the peaceful environment she was surrounded by, she benefited from all her experiences and featured all sorts of characters and animals. The artist recalls, “I spent a lot of my childhood drawing in the vegetable garden, making fires and looking after the sheep that slept in the living room. Sometimes I sat in the meadow and looked at lapwings and other birds and was often chased away by the mean old farmers.” When she was 12, her father gave her two unhatched geese eggs as a gift. For weeks, she tended to them. Jet and Juul became Jade’s best friends. Does it sound like a fairy tale? It does. Jade goes even further by opening up, stating that these geese were a fundamental part of her childhood. A special bond was formed. When her parents got divorced, her father released them in the wild. She has never seen them since. “I once went looking for them and started calling in the meadows, but I didn’t find them. Geese can live as long as 65 years, so sometimes I secretly wonder if they are still alive. I would love to have them with me again. It sounds childish, I know, but these geese were so pure and honest. I think I will miss them for the rest of my life.”

Culture, religion and different individualities are all central to Jade’s work. “My faith certainly has a lot of influence on my work. I believe that painting brings me closer to God. Painting is a spiritual form of expression. God guides me in life and I am grateful for that every day.” She declares. Living in a world filled with diversity, where people come from so many different backgrounds, with a wide range of lifestyles and traditions, Jade adds “I think the biggest problem in our society is our ego, our greed for power and exploiting differences between people.” She travelled a lot by herself to places that opened her mind to the world. Recalling key memories, she remembers meeting a tribe in Malaysia. “The tribe taught me to shoot poison dart arrows and I learned their signs and signals. When I left, I realised that I had learned so much from them and created a special connection just by sharing life experience with them.” This, purely because she took the time to get to know them and took an interest in learning from them, without judgement. These are the kinds of experiences that inspire Jade’s work.

“We all have a child within us, and I think we should never lose sight of this. Our childishness guards our wisdom and honesty.”

“I want to make people aware of the fact that human connection is a form of wealth.”

Making the choice to move from Amsterdam to London was natural and easy for Jade. Amsterdam started to feel too small for her, and she had been wanting to move to London to work further on her art, as it fits perfectly with her current themes. “In Amsterdam, I often observed people during their daily routine, cycling along the canals at dusk in search of stories to paint. I grew increasingly interested in topics such as overpopulation, over-consumption, city life and the effects of stress. I constantly worry about the world we live in, the way we treat others, and the ease with which we live in our own worlds, often turning our backs on one another.” That’s one of the reasons why Jade is always searching for more subjects to depict and confront the world with, making London an obvious choice. We can hardly disagree as London is a beautiful city, with so many secrets and so much history. But also, a city with many different faces and cultures. It took Jade a while to get used to her new city. She became fascinated by how the escalators of the London underground were crammed with hundreds of exhausted working people. “Sometimes I stand for hours at the bottom of the escalators and observe the scenes unfold”. Revealing that she does the same in other places, like Harrods, or when taking a walk from Regent Park to Bethnal Green, Hackney or Kensington. Strolling through the city gives her clarity and helps Jade reflect on the layers of our society. “I see my paintings as stories that I tell by observing society.” In Van der Mark’s studio are several large canvases for an upcoming solo show. She explains that “one is about an escalator in Piccadilly Circus tube station in London, a second one is about the fashion industry in which the influence of the elite plays an important role. The third work pictures a waiting room full of heavily made-up women, waiting to get their lips filled and the last is about everyday people struggling under heavy workloads.” All of them are depicting groups of people, staring at her all day, so she’s never truly alone! “It can be a Roald Dahl children’s story, a dramatic piece of classical music or a politically fraught piece I read in the newspaper. The world around me inspires me enormously, especially when it comes to groups of people or cultures, diversity and overpopulation.”

Jade observes large groups of people living alongside each other in a crazy, fast-paced existence. Topics such as disconnection, the influence of social media, overconsumption, power and work-related stress are key themes. “Image sometimes comes naturally, from standing at the bottom of an escalator in the subway for hours or at intersections on the road, to talking to demonstrators about climate change or watching documentaries about everyone and everything for hours. I absorb it all until suddenly I get an overwhelming desire to paint and then it all comes pouring out.” Much like sound can communicate a word and thereby ultimately meaning, a canvas functions on a similar level for her. Naturally, Jade stops to talk about her painting, We’re All Human. A painting depicting the current zeitgeist – a German concept describing the ‘spirit of the age’ or ‘spirit of the times’. As she observes her surroundings, Jade explains that she “sees that we are comfortably devoid of the capacity to connect with one another. Our concerns are more often than not drawn inwards, and this is now an acceptable norm. I think we ought to look at this critically.” Speaking more extensively about this notion, it quickly becomes clear that Jade thinks it’s easy to say that our mobile phones, headphones and the exhausting restlessness derived from modern-day responsibilities at work and at home, have created this disconnection between us. In her point of view, we are individuals behaving in ways that polarise individuality. It’s made many of us inevitably feel lonely, and sometimes big cities such as London can feel like the loneliest city in the world. “I want to communicate this loneliness. Each person is placed claustrophobically beside another and represents a different cultural, race, political ideal or gender. We are all interesting, but lack interest in each other.” In that sense, Jade’s broader message would be that on an ethical level we might be endeared to broaden our horizons and learn about each other, but many of us keep our fears and questions to ourselves. By keeping these questions inside, we consequently make up answers too.

Jade Van der Mark’s fashion background remained her primary focus for several years after graduating. In 2016, she won the Dutch fashion award in Milan during fashion week, where she stayed a little longer as part of a fashion residency – an experience that gave her the opportunity to build her own brand. As a consequence of her winning the prize, Dolce and Gabbana asked Jade to work for them. It was a tough decision but, in the end, she turned this proposition down as she wanted to keep her business small rather than giving it up to a big company. “Now, I call my textile works art rather than fashion. Each work derived from my paintings, taking from 500 to 800 hours.” Pieces that will be shown for the first time in London during her solo show. Jade Van der Mark focuses entirely on the show, opening in September. She hopes “people recognise themselves in my paintings and start having honest conversations with each other. My aspiration is to really touch people with my work because I find that it is essential in life to give back to the community in every way possible.” After her experience in London, New York may be an interesting place to explore and carry on her work and research on society. In the long run, Jade’s dream is to buy an old farmhouse in Italy, somewhere close to nature; turn it into a permanent studio to practice painting and, of course, fill it with geese.

Original link of the article: https://www.hereandtheremag.com/jade-van-der-mark